It’s quite trendy now to make layouts with cut-out shapes or words. Here are a couple of examples:

One way you can create this effect digitally in Photoshop is to make the shape you want to appear cut out (like the orange and white chevron-patterned circle in the top layout), put it on top of your paper layer, and use an inner shadow style to make it appear to have depth, to be cut into the paper. Here’s a great tutorial from Marisa of PixelScrapper and another at One Little Bird that includes a free download of inner shadow layer styles.

The inner shadow technique works well for something like the top layout, where each “cut out” shape contains its own patterned “under layer.” But it gets trickier when you’re doing something like the “Thank You” in the bottom example layout. If your background paper has a pattern that you want to be continuous and properly lined up when it “shows through” your cut out, then in order to use the basic inner shadow technique you’d have to do something like create a text layer that says “Thank You,” lay a piece of the LOVE paper over the text so that its pattern lines up perfectly with the LOVE paper below the text, clip the top LOVE paper to the Thank You, and then apply an inner shadow style. That’s not too complicated, but what if you change your mind about your background paper? Then you have to do the whole thing over again. What if you have a couple of different pieces of paper and want part of each to show through under your cutout? Or what if, like in the example below, you wanted something that could overlay a photo and some paper and let them both show through? (“Love This Photo” brush is by Ali Edwards.)

At a certain point in asking these questions I started to wonder if there wasn’t a way to actually cut out the top layer so that the actual layer underneath could show through. Of course I could use the magic wand to select my “Thank You” and then delete that area from the multi-striped paper, but then what if I decided I wanted to change my font or text size or even the words I used? I’d have to start all over again. I searched high and low for answers. It’s actually a pretty hard thing to search for – it turns out the terms “cutout” and “cut-out” and so on have many different meanings in digital scrapping and design so I waded through a lot of irrelevant stuff. Finally in the comments section of a Daily Digi article (a tutorial on the line up paper, clip paper, inner shadow technique I was describing earlier) I found what I was searching for! The answer lies in a seldom used blending option called Knockout. 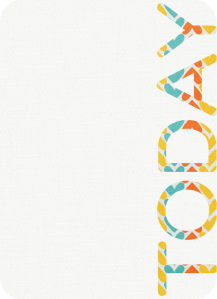 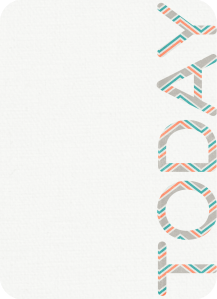 This technique is incredible! It totally freed me – I can make cut outs and drag them all over the place and what shows through will be the actual layer below. I can write text and change the font, I can cut out shapes and change their size or orientation – whatever I do, the knockout travels along for the ride. No do-overs necessary. For example, in the journal cards above, my master template has the word “TODAY” in knockout text, and then I just slip a different piece of patterned paper underneath to make a new card. If I wanted to change the text to read something else, I could do that, too, so it’s much more versatile than just having a white over-layer with the word TODAY deleted out from it. Of course you can also still add an inner shadow to get that nice depth as well.

Here is the tutorial I finally located to walk me through making knockout text/shapes/etc. Turns out there are two kinds of knockout: “shallow” which “punches” through only the layers you specify, and “deep” which punches through all the way to a Background layer, or, if there is no Background, to transparency.

So have I won you over to the magic of the knockout effect? In case you’re not convinced, I have something for you that might sweeten the pot. Here, for your personal use and delight, are my knockout actions for Photoshop! There are two, “shallow” and “deep,” as demonstrated below. The actions themselves will walk you through what to do. The instructions are written in reference to creating knockout text, but you can use the knockout effect on anything – shapes, doodles, anything! Enjoy, and if you do end up making something with the action, I’d love to see it!